Remixed: The Lost Colony of Roanoke

*Note: In this blog post, I reimagined what happened to the Lost Colony through the style of BuzzFeed article*

What really happened to the colonists?

The coolest topic I remember learning about in my elementary school’s North Carolina history class was the Lost Colony of Roanoke. I was instantly captivated by the mystery of what happened to the colonists.

In the early 1500s, there was a group of colonists that sailed from England to the New World, landing on Roanoke Island off the coast of North Carolina. The settlers quickly returned home after running out of food and several Native American attacks. Then, in 1587, a second colony was established in Roanoke. This is where it gets crazy! When Sir Walter Raleigh, who was in charge of the settlement, finally arrived in Roanoke in 1590, all the colonists had disappeared! (“The Lost Colony: A Local Legacy”) 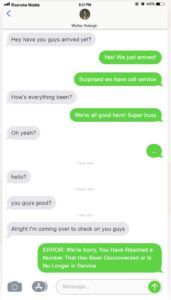 No one knows where they went; however, there are numerous theories as to what happened (“The Lost Colony of Roanoke”):

1. Absorbed into the Tribes or Made Slaves?

One of the most popular theories is that the colonists left the island and were taken in by another tribe. They may have been made slaves or assimilated into the tribe. There is historical proof to this theory as Fred Willard discusses in his paper “A Reassessment of the Zuniga Map”: according to Francis Nelson’s Zuniga Map drawn in 1607, there seems to be a place where survivors fled.

Once he arrived on the island, Sir Walter Raleigh found the word “Croatoan” carved into a fence post. This could possibly point to the tribe that may have taken in the colonists as explained earlier. Even scarier though, this word has been associated with other mysterious deaths/disappearances over the years: Edgar Allen Poe’s, Amelia Earhart’s, and Ambrose Bierce’s. 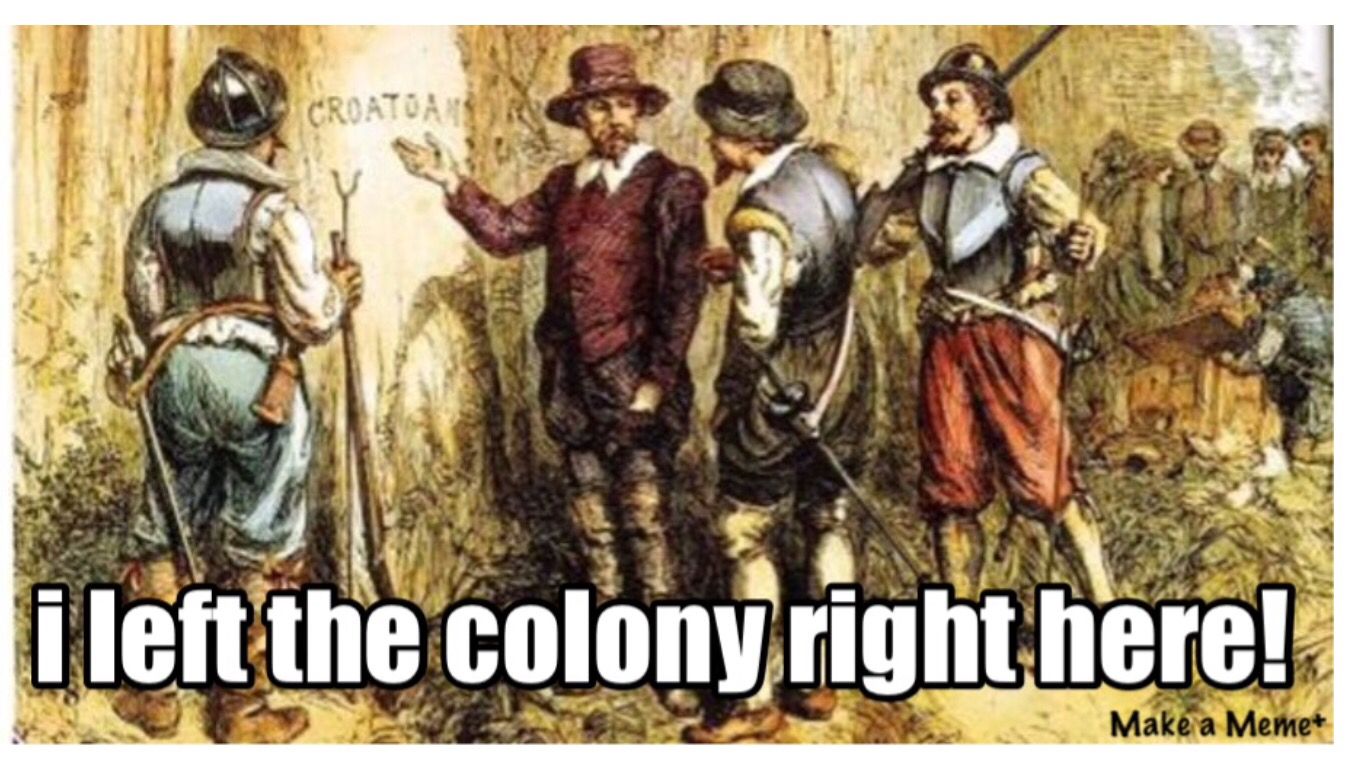 One of the more likely explanations of what happened could have been that they were murdered by Native Americans in the area. I mean the first settlement cited Native American attacks as one of the reasons of their departure from the island. Apparently John White was told by Chief Powhatan that his tribe killed them because of the settlers living with a tribe that refused to ally with them. Eventually, King James and the rest of England found out; therefore, Chief Powhatan was blamed by them, making this a believable claim.

The settlers could have been forced to resort to cannibalism due to a lack of food. As the first expedition points out, food was scarce in Roanoke. In order to survive, the colonists may have had no other choice. I mean even Jamestown had to partake in cannibalism to survive. However, one flaw in this theory is where were the bodies? 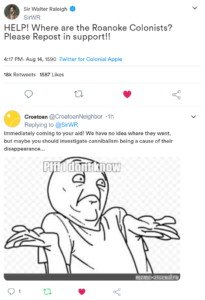 Like cannibalism, there is historical proof to disease. As no one’s immune system had been exposed to the New World’s germs and infections at that time, disease was an extremely common way to die for these settlers. They could have encountered a deadly infection that wiped out the whole colony. Still, the question remains, if everyone died from disease, what happened to the bodies? 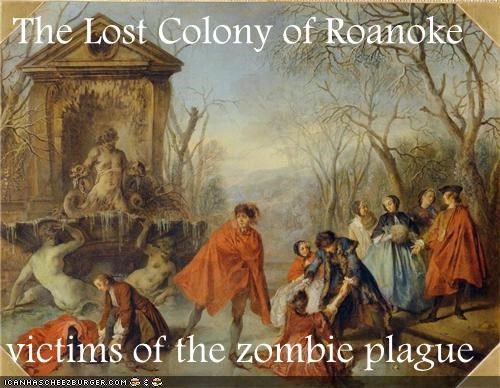 (“The Lost Colony of Roanoke”)

There was a stone discovered in the 1900s that had a message carved in it from Eleanor White Dare, one of the settlers, detailing that all but seven of the colonists had been killed by Native Americans. After this one was authenticated, other stones were found, but these were determined to be forgeries. The original stone could provide an explanation as to what happened to the settlers. This could be a possible solution to the centuries long unsolved mystery as it is a message from one of the colonists herself. 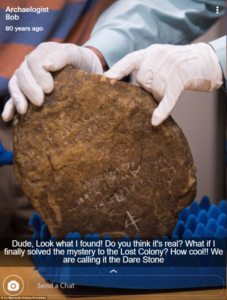 Could Aliens be the reason of disappearance? This is certainly one option if you believe in aliens, and it would explain the lack of evidence. Who knows, maybe there were UFO sightings in the 1500s, and we just do not have records of them.

All of these are plausible, but if you ask me, I think that they were just playing a really a game of Hide and Seek? Think about it…

Overall, I can’t even imagine how times would have changed in the 1500s during the Age of Exploration if they had access to the technology and social media that we have now. Roanoke never would have been lost because of how communication works. Even though I live miles away from home, I still talk to my parents at least once a week. The settlers would not have gone as long as they did without contacting anyone unless there was a problem. I know that if my parents did not hear from me as often as they do, they would track me on Life360. Imagine if the colonists had Liffe360: maybe whatever happened would still have happened, but at least it would not be a mystery. The people/their bodies surely would have been found if they had their device on them, and they certainly would have had them on their person because I know that I always have my phone on me.

It is so difficult now to go off the grid, so there is no way an entire settlement could disappear without a trace if this happened today. It is also interesting how even nearly four hundred years later we still do not know exactly what happened. There are some people that try to move out into the middle of nowhere to get away from all technology. They act like it is still the 1500s, trying to run away from technology’s constant surveillance. For instance, in The Circle, Mercer tries to do this to get away from the watchful eye of the Circle. However, this does not end well for him as he ends up dying in the end. I think this shows how even if we try to evade technology, we can never get away completely. There is a reason why we can not go back 400 years and relive “the good old days.” As much as people wish they could go back to simpler times, I just do not think it would be possible.

Conerly, Jennifer. “The Lost Colony of Roanoke: 8 Theories About the Mysterious Island and Its Inhabitants.” HistoryCollection.com, historycollection.com/lost-colony-roanoke-8-theories-mysterious-island-inhabitants/.

“The Lost Colony of Roanoke: Victims of the Zombie Plague.” Cheezburger, cheezburger.com/5331326208.

Willard, Fred. A Reassessment of the Zuniga Map. 2008, www.lost-colony.com/Zuniga.pdf.

Choose Your Own Adventure: Minority Report

Imagine a world where technology can predict when someone is going to commit a crime: well that is exactly what it is like in Minority Report, which takes place in the not so distant future Read more…

For this week’s blog post, I analyzed Tinder’s Privacy Policy (see here). If you don’t know, Tinder is an online dating app that allows users to swipe on people’s pictures, liking or disliking a profile Read more…